Marko Marinkovic, a.k.a. Slatkaristika was born on August 15th, 1986 in Skopje, Macedonia.

At 11 years old for the first time he began writing, creating the poem “Ear ” which won a prize in a national competition.

2 years later hip hop culture comes as a continuation of his manuscript , and because of his poor childhood and rebel spirit, he found the Rap group Edinstvena opcija and started to express his feelings and meanings threw his lyrics.In 2005 Arena Records has released their only album “Rap tvrdina”.

In 2009 Slatkaristika signed a contract with Jovanov Records and in June released his first solo album “Slatkaristika budalo” that was sold in 48 hours starting the hip hop revolution in Macedonia.

His second album, entitled as “Noviot album” released in 2012 and it became the best-selling album of the year.

In his country Slatkaristika considered one of the most influential artist who ever appeared on the scene in Macedonia.

Except for himself he is a song writer for other artists in Macedonia too.

Together with Sanja, in 2012 he established Inovativa Group – advertising and entertainment agency.

Now Slatkaristika is working on his new, solo album no.3.

In March 2016, he presented a duet song with his Bulgarian colleague – Krisko.

In May 2017 he released the single “Terorista” which became a hit not only in Macedonia but gained popularoty all over the Balkan.

In October 2017 he presented his single “Money/Maani”.

In 2018 he surprised his fans with his new single “Luda Romantika”. 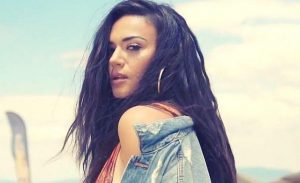 Elena Risteska is a Macedonian recording artist. She represented North Macedonia in the Eurovision Song Contest 2006 in Athens with the song “Ninanajna”, and finished in 12th place. Risteska was born in Skopje, North Macedonia on 27 April 1986. She showed an interest in the arts at an early age, inheriting her musical interest from […]