Severina is a Croatian singer. Her style can be described as pop with various folk influences.

She was born on April 21st, 1972 in Split. As a child, she took smaller parts in theatre and opera productions in her native Split. During the 1980s, having won numerous awards at local festivals, she launched her professional career at an early age, which ultimately resulted in her moving to Zagreb in 1989 to expand her career further.

In 1989, she recorded her first studio album titled “Severina”. The album served as her breakthrough to the national platform. It included 10 songs such as: “Vodi me na ples”, “Sve do zore”, “Svirajte mi rokeri”, “Budim se s imenom tvojim”, “Zamisli” and “Tvoja prva djevojka” which became an iconic song and a huge hit among younger fans.

Severina’s third studio album, “Dalmatinka” released in 1995, has helped to establish her as the national pop icon. The leading song, “Dalmatinka”, became a Croatian evergreen and captured emotions of many at the time of release. In the song, Severina sang about her love for the native Dalmatia, white color and the Virgin Mary. The album had total of 10 songs among which were: “Ne bi ti oprostila”, “Ne spavaj mala moja” (cover), “Paloma Nera” and others. Both “Paloma Nera” and “Dalmatinka” became number 1 on national top list.

“Trava zelena” – the album she released in 1995 – achieved spectacular success and was described as one of the best albums of 1990s in Croatia. The title song, “Trava zelena”, was the most popular song of the year and Severina’s primate on the Croatian media platform became stronger than ever before. The composer of the whole album was Zrinko Tutic. Album had total of 10 songs including: “Trava zelena”, “Vatra i Led”, “Mr. Taliman”, etc.

“Moja Stvar” (1996) – her fifth studio album. The whole album was inspired by rock sounds and was both critically and publicly acclaimed. The song “Moja stvar” was written and composed by Severina herself and was praised by critics. After the release of the album she had gone on the big Croatian tour, performing in every bigger city including Zagreb, Rijeka, Split, Osjek, etc.

Often referred to as her most iconic album, “Djevojka sa sela” (1997) is truly a masterpiece of Croatian music production. The album was composed and written partially by Zrinko Tutic and partially by Severina herself. The title song “Djevojka sa sela” is even today considered as one of her biggest hits. It was proclaimed an anthem of Croatian National Football Team while their involvement in European Football Championship during which they ranked at number 3. Djevojka sa sela was her last album composed by Tutic and his production company Tutico. They departed after the release because of the dispute over her contract.

Severina’s 7th studio album, “Ja sam pjevam” (1999) was a continuation of the pop sounds heard on her previous albums. The album was critically and publicly acclaimed and achieved big success. It had total of 10 songs: “Ja samo pjevam”, “Ante”, “Esmeralda”, “Tuzna pjesma, etc. The composer of this album was famous and respected author Djordje Novkovic with whom Severina started working on her next album.

Following the huge success of her 2001 album “Pogled ispod obrva”, Severina’s 2002 concert tou “Virujen u te” further confirmed her status of one of the most popular Croatian music artists. This was her first major tour on which she performed in most of the big cities on the Balkans including Sarajevo, Bosnia and Ljubljana, Slovenia. The song “Virujen u te” became one of the biggest evergreens in Croatian music history. It is referred to as one of her most beautiful songs to this day.

After a two-year break, she released her 8th studio album “Severgreen” in 2004. This was her first bigger project and public appearance after the sex-tape scandal which occurred in 2003. The album was influenced by jazz music. Severina sang about her hard decisions and struggle to overcome public shame, in the song “Na sceni sama” she captured the emotion of the public by singing: “Even when lies and noisiness try to destroy me, I still stand alone in the spotlight”. Although the album did not achieve as great success as the previous projects, Severina continued to work hard and fought her way back.

In 2006, she won the Dora 2006 festival with the song “Moja stikla” and represented Croatia at the Eurovision Song Contest 2006 in Athens,Greece, on May 20, 2006, finishing 13th with 56 points. The song caused some controversy in Croatia when a few journalists and musicologists claimed the song resembled the music of Serbia. However, prominent Croatian ethno-musicians such as Dunja Knebi and Lidja Bajuk disagreed, and both the song’s composer Boris Novkovic and Severina herself have claimed that the song includes Croatian folk music influences from the Dalmatian Zagora (Inner Dalmatia) such as gana and rere singing and lijerica instrumentation. After the contest she started working on her 10th studio album together with Goran Begovic, one of the most successful music composers in the Balkans.

Severina’s long-anticipated tenth studio album “Zdravo Marijo” mostly composed by Goran Bregovic, was released in May 2008. After the first single from the album “Gas, Gas” was released, accusations followed once again that particularly due to the brass elements and mischievous, prankish lyrics, the song closely resembled pop, another type of music played in Croatia. Additionally, after having made several public appearances wearing clothes depicting religious imagery (most notably a tight shirt with an image of the Virgin Mary with Severina showing ample cleavage), some protested the abuse of religious elements, calling them offensive. However, the album has been popular and Severina released four more official music videos for singles “Tridesete” composed by Sezen Aksu, “Gade”, “Haljinica Boje Lila” and “Zdravo, Marijo” (title track) composed by Bregović. Following the release of the album, Severina went on to her second big regional tour. She performed in every bigger city on Balkans. By the end of the 2009 she had had a concert in Kombank Arena (Belgrade, Serbia) singing in front of 20 000 people. The concert was followed by strong media promotion and was proclaimed “the most spectacular event of the year”.

In December, 2009, Severina released her next single called “Lola”, which is the part of the Miligram compilation.

Her album and tour “Dobrodosao u klub” held her at the top of Croatian pop music for all of 2012 and 2013, and established her position as the most popular pop singer in Ex-Yu countries. Album had total of 12 songs, 7 of them singles. First two songs that were released were “Brad Pitt” and “Grad bez ljudi”. “Brad Pitt” became one of the biggest hits of the 2011 and “Grad bez ljudi”, an emotional love song, was viewed more than 200,000 times on YouTube setting a record across the Balkans. “Italiana”, released in the summer of 2012, was viewed more than half a million times in the first 24 hours and has around 60 million views to this day. Later on, she released “Uzbuna”, “Dobrodošao u klub” and “Tarapana”. “Dobrodošao u klub” tour was the most spectacular tour ever seen in the Balkans. She performed, yet again, in every large city in the region.

After “Dobrodosao u klub” album and tour, Severina continued with her career progresses recording many ultra-popular songs. In 2013, she released the song “Hurem”.

In March 2014 she released the song “Alcatraz”. Alcatraz is often referred to as her most beautiful and emotional song of the postDUK era.

Soon after, she released the song “Brazil” in order to support the national football team of Croatia during the World Cup 2014 in Brazil.

In July 2014, she released “Uno momento”, a duet with the Serbian band Ministarke.. The song was noted for its highly provocative video clip. The song became very highly popular across the Balkans, becoming a summer hit in Croatia, Serbia, Slovenia and Bosnia and Herzegovina. Up to this day the song has been viewed more than 103 million times becoming the second-most viewed song on the Balkans.

In October 2014, she released a song with the Serbian singer Sasa Matic “More tuge”.

In the end of 2014 she released the song “Generale” with Croatian band Uciteljice. The song became also very popular.

At the beginning of 2017 she released the song named “Kao”. It has been viewed more than 700,000 times in one day and served as an introduction into her new studio album which is about to be released in the following months.

In March she released the second official video from the upcoming album – “Otrove” in a collaboration with the Bosnian singer Jala Brat. The song was viewed around 1.3 M times in the first day on YouTube – number with which she broke the regional record for the most viewed song in the first day of its release on YouTube in the Balkans.

After that followed  “Mrtav bez mene” and “Kuda za vikend”.

Then she made a few collaborations “Hazarder” in a collaboration with Leon, “Unaprijed Gotovo” with Petar Graso, “Od Leta do Leta” with Miligram, “Tutorial” with Ljuba Stankovic, “Magija” with Jala Brat. 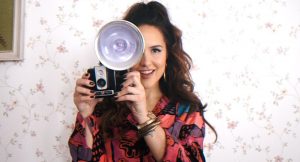 Lana Jurcevic was on November 7, 1984 in Zagreb, Croatia. At an early age, she had a passion for singing, and thought she would eventually become a singer. The pop singer is internationally known with the stage name La Lana. In 2003 at the beginning of her musical career, Jurcevic released her self-titled debut […]